Foot Surgery for Runners is no Longer the Last Resort

Paula Radcliffe first noticed pain from a bunion (see photo below) after she won the 2005 world championships marathon. Over the next four years, the world record-holder in the marathon suffered a series of injuries, and despite occasional bright spots, such as winning the 2007 and 2008 editions of the New York City Marathon, she was in rehab more often than not. Finally, in May 2009, Radcliffe underwent bunion surgery at the hands of podiatrist Amol Saxena, in Palo Alto, Calif. 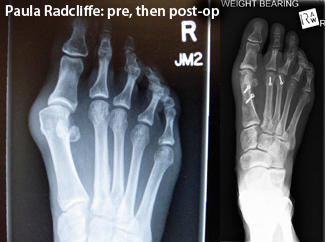 “When we sat down and looked at my injury history prior to the surgery in 2009, we realized that every injury, bar one, since 2004 had been caused directly or indirectly by the bunion,” Radcliffe says. “Even the femoral stress fracture was related to my bunion pain, as it came from imbalances caused by modifying my orthotics to enable me to run on the right foot without significant pain.”

Could Radcliffe have returned to normal running sooner by taking the counter-intuitive step of opting for surgery earlier? While foot surgery should usually be considered a last resort after conservative treatment has failed, there are times when surgery may allow a runner to return to training faster. As in Radcliffe’s case, surgery can often provide a cure, while conservative treatment may only be treating the symptoms. Surgical techniques have improved considerably in the last decade; advances that allow for faster recovery and more predictable results can mean that the runner’s traditional avoidance of surgery is based on outdated thinking.

Let’s look at four common running injuries — bunions, neuromas, Achilles tendon problems and plantar fasciitis — in terms of when to consider surgery over more conservative treatment. First, though, these caveats: You should always understand that there aren’t any guarantees with any surgical procedure. Even the best surgeon in the world has poor outcomes. It’s also important to note that some people take longer than average to heal while some can return to activity faster.

The medical term for a bunion is Hallux Abducto Valgus (HAV). The hallux (big toe) deviates towards the second toe, and the first metatarsal head protrudes in the opposite direction. The most common complaint associated with this deformity is pain at the medial aspect of the joint.

The deformity is commonly considered an inherited trait, and there is no scientific evidence that a bunion can be prevented with conservative treatment. Conservative treatment starts with making sure your shoes are wide enough. Occasionally treatments such as cortisone injections, custom orthotic devices and various paddings and splints can help to treat the symptoms, but surgery is the only option to correct this problem. I don’t recommend surgical correction unless the patient has pain, but as in Radcliffe’s case, some injuries elsewhere may be indirectly related to the lack of proper function of the big toe joint due to HAV.

Surgical correction typically involves cutting and repositioning the first metatarsal with the use of screws or pins to hold the bone in the proper position while it heals. Depending on the severity of the deformity, the bone may need to be cut at different spots. The severity of the bunion determines what procedure is required; larger deformities require more extensive correction, leading to a longer recovery time. Expect to miss a minimum of six to eight weeks from running and at least 12 weeks before the foot begins to function normally. The use of newer and better screws has shortened the recovery time considerably. Some screws have a lower profile, which often eliminates any discomfort associated with the head of the screw and allows the screw to remain in place permanently.

A neuroma is inflammation of the nerve in the ball of the foot, most commonly involving the area between the second and third metatarsal heads or the third and fourth metatarsal heads. Symptoms include pain in the area directly before the toes, shooting pain into the toes, numbness in the area and sometimes a feeling of walking on a marble.

The majority of the time, conservative treatment, consisting of wider or more cushioned shoes, custom orthotic devices, cortisone injections and padding around the area, can alleviate the pain. One last resort before considering surgical intervention is a series of injections using a 4 percent solution of alcohol mixed with local anesthetic, a procedure known as sclerotherapy. The alcohol causes degeneration of the nerve fibers. The protocol involves a series of three to seven injections performed weekly. One study purported an 89 percent success rate with the procedure. I’ve not found anywhere close to that level of success, but there are no apparent negative side effects to sclerotherapy.

One runner I treated tried all of the above, including sclerotherapy, to deal with pain in her foot that was bad enough to interfere with her training. When none of the conservative treatments brought relief, she elected to undergo surgical excision of the nerve. Like most foot surgery, hers was performed on an outpatient basis. She was running within four weeks of her surgery. Nine years later, she’s still pain-free at her former neuroma location.

A newer technique called Endoscopic Decompression of Intermetatarsal Neuroma (EDIN) is a much simpler surgery. Neuromas are close to the base of the toes, which have a ligament on the top and bottom. EDIN involves making a very small incision between the toes in the interspace, then inserting a small camera to visualize and cut the top or dorsal ligament. The theory is that this “decompresses” the nerve, thereby relieving the pain. There’s little downside to this procedure. If pain persists after this surgery, then the nerve can be excised in the traditional manner.

Achilles tendinitis is one of the more difficult injuries any athlete can encounter. Within two weeks of Achilles inflammation, the tendon fibers begin to degenerate.

Shock wave therapy (ESWT) is also an excellent conservative treatment for chronic Achilles issues. ESWT sends sound waves deep into the tissue, promoting neovascularization (that is, the production of new blood vessels to allow the tissue to heal). The treatment can be expensive and the full effect isn’t seen for up to three or four months. There are almost no negative side effects to ESWT, but the treatment isn’t typically covered by insurance and can cost in excess of $1,000. In my practice I use the D-Actor 200 from Storz Medical, and have seen over a 70 percent success rate when used to treat Achilles tendinosis.

PRP (Platelet Rich Plasma) is a newer treatment involving giving a sample of your own blood, which is then processed to extract the plasma and injected back into the injured tendon or muscle. The treatment is costly and not covered by insurance, and scientific studies haven’t shown it to be much more effective than a placebo. In a review of all the medical studies published in the British Medical Bulletin on the use of PRP, the authors found just three high-quality studies among all the literature published, and none of these studies showed any statistically significant improvement.

Surgery for Achilles pain may involve surgery on the tendon itself or, more commonly, closer to the attachment in the back of the calcaneus (heel bone) where patients may commonly have a bone spur known as a Haglund’s deformity. The use of anchors has further enhanced surgery involving the back of the heel, allowing the tendon to be detached to remove any bone spurring and then reattached with the use of an anchor. Recovery involves being in a short leg cast initially, then a removable cast followed by physical therapy with a return to running in roughly three months. World championships marathoner Keith Dowling had pain for the last two years of his competitive career from a Haglund’s deformity(pictured, above). After failed conservative treatment I operated on Keith using anchors. He doesn’t compete anymore but is able to run with no pain in the back of his heel.

This injury typically resolves over 90 percent of the time with conservative treatment. The most important factor in treating this very common injury is early intervention. Calf stretching, icing with a frozen water bottle 20 to 30 minutes two or three times per day, taping and massage are the initial treatments, and work well for up to half of patients with this injury. When those treatments don’t help, then cortisone injections, over-the-counter and custom orthotic devices, Active Release Therapy and physical therapy are the next wave of treatments.

One area of treatment that deserves more attention is strengthening the foot. Weakness of the intrinsic musculature accompanies plantar fasciitis. Early introduction of restrictive shoe gear in Westernized cultures may contribute to atrophy of these muscles. As part of the rehabilitation from this injury, it is important to add a strengthening and proprioception protocol to the treatment plan following the reduction of pain. Grabbing a towel with the toes, balancing on one foot and progressing to the use of a balance board can facilitate foot strengthening. After performing these exercises athletes can progress to barefoot running in the grass. Many of the shoe companies are now making minimalist shoes that are a nice adjunct to the treatment plan when used initially in moderation.

Shock wave therapy has been found to resolve plantar fasciitis in up 70 percent of cases that didn’t improve with more conventional treatments.

TOPAZ and platelet-rich plasma therapy are two other pertinent treatments, but again, neither has a significant amount of medical literature reviewing its effectiveness. Sedation and local anesthesia in the operating room are necessary to perform TOPAZ. Needle holes are placed in a square pattern on the medial and central bands of the fascia on the bottom of the heel at the area of greatest pain. The TOPAZ unit is inserted into the needle holes, and the fascia is treated with a short burst of electric energy, resulting in microscopic cutting of the fascia, increased blood supply and break-up of the scar tissue. There also seems to be an increase in strength to the fascia with this procedure. The drawbacks are the need for surgery, the cost of surgery and the fact that scar formation from the multiple incisions may be a source of pain. Although scar formation is very rare, there’s a need for additional downtime with this procedure, and recovery is usually slower and more painful.

It’s crucial that your physician rule out other causes of heel pain, such as nerve entrapment, before considering surgery; often an MRI should be ordered to confirm the proper diagnosis. Other surgical approaches include endoscopic plantar fasciotomy, in which the fascia is cut at the insertion point; ideally there’s minimal trauma to the tissue due to the use of arthroscopy. A traditional open approach allows the surgeon to examine for nerve entrapment, but it involves a larger incision, creating the possibility of more scar tissue, which can, ironically, cause nerve entrapment. Another approach, known as an instep fasciotomy, involves making the incision right in the arch. This procedure has the advantage of causing less scar tissue.

The most worrisome complication involves creating instability of the foot. Most surgeons won’t cut the fascia completely; they often leave the outside portion of the fascia intact. Calcaneal cuboid syndrome is one possible complication that can be extremely difficult to resolve. Of all the surgeries in the foot, this is the one that should absolutely be considered as the last resort.

When deciding whether foot surgery makes sense, here’s an important question to answer:
Have you exhausted more conservative treatments that will cure your problem instead of just treating its symptoms? The best person to answer these questions with you is your local sports podiatrist. Ideally you want your podiatrist to be both a fellow of the American Academy of Podiatric Sports Medicine and board-certified in foot surgery by The American Board of Podiatric Surgery.