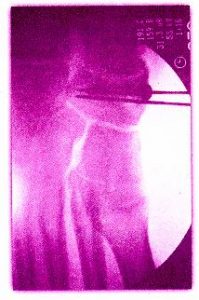 The words “stress fracture” strike fear into all runners. The diagnosis usually means no running for at least four to six weeks. What exactly is a stress fracture and why should it scare you? More importantly, what can you do to avoid a stress fracture, and to deal with one if it does occur?

A stress fracture is a crack that does not go completely through the bone. Initially called march fractures, they were first noted in the 19th century in Prussian soldiers who marched too far or too often. The injury has two main causes: too much repetitive stress on a bone and/or weakness of the bone, which can result from a number of different factors. If the repeated strain is greater than the strength of the bone, then it will fracture.

The most common site of a stress fracture in the lower body is the tibia or shin bone, followed by the metatarsals, the bones in the foot behind the toes. Most stress fractures develop gradually. A typical tibial stress fracture will initially be felt as “shin splints,” a catch-all term that refers to pain along the inside of the tibia. The pain usually starts out over a large area along the shin bone, and is mainly noticed after a hard training session or race, or the morning after a long or difficult workout.

Shin splints occur when the muscles pull away from their attachment site along the inside of the tibia. At this point it’s possible to prevent a stress fracture by responding to the developing problem: Stop running and see a sports medicine specialist. Left untreated, the muscles will continue to pull, and this may cause a crack to form in the bone. The pain will progress to the point where it is noticed more during the run, and become focused on a smaller area of the bone.

Do not be fooled into thinking that your injury is a stress fracture only if you are unable to run. Frank Shorter unknowingly ran on a stress fracture in his foot during his silver-medal winning marathon in the 1976 Montreal Olympics. Dave Johnson competed on a navicular (a bone on the top of the foot) stress fracture in the 1992 Barcelona Olympic decathlon, winning the bronze medal. He paid the price of requiring surgery after the Games to place two screws across the fractured bone.

If the pain is very focused on one area and becomes constant or worse during a run, then you should see a sports medicine specialist immediately. Because the fracture is not completely through the bone, often it does not show up on traditional X-rays, and therefore a bone scan is a better way to detect the problem. The test usually is done at a hospital and involves an injection of dye into the arm, followed by a series of special X-rays taken at different time intervals, with the final one typically taken after three hours. The cost, usually several hundred dollars, is almost always covered by insurance. (It helps to have a doctor who is sensitive to a runner’s needs if you are in an HMO-type insurance program.) The bone scan will show the approximate site of a fracture; however, it is not highly specific as to its exact location and extent. Therefore, a follow-up MRI or CT scan sometimes is done. Again, the procedure usually is insured, but check first, because it can cost more than $1,000.

Some of the causes of a stress fracture include poor biomechanics, inflexible or weak muscles, overtraining, doing too much too soon, training on hard surfaces, wearing improper or worn-out training shoes and doing too many races in racing flats in a short period of time. In addition, some people are predisposed to stress fractures because of a calcium-poor diet or osteoporosis (a progressive loss of bone mineral), and if these problems persist, another fracture is likely to occur.

Women and girls may be prone to stress fractures as a result of the Female Athlete Triad, a combination of osteoporosis, amenorrhea (absent or infrequent menstrual periods) and eating disorders that occur together.

Amenorrhea is associated with decreased estrogen in the body, which limits the ability to process the calcium used to strengthen bones. Eating disorders often lead to poor intake of nutrients, including calcium, and to significant weight loss, which can bring on amenorrhea.

The Role of Diet

Eating well can play a crucial role in preventing stress fractures. If your diet is short on calcium, your body will steal the mineral from your bones, making them vulnerable to breaking. Men and women should consume 1,000 milligrams (mg) of calcium daily; young adults and the elderly should aim for 1,200 to 1,500 mg. Food sources are better than supplements because they are generally better absorbed. An eight-ounce glass of milk has 300 mg of calcium; eight ounces of non-fat or low-fat yogurt has about 400 mg.

If you are not getting enough calcium from your diet, then consider a daily 500-mg calcium carbonate supplement (calcium carbonate is the least expensive form and works just as well as calcium citrate). Check the label for the amount of elemental calcium in the tablet, which is more important than the tablet’s total weight. Including vitamin D in the diet helps the body absorb calcium.

Treating stress fractures centers on allowing the bone to heal, which takes four to six weeks for most bones. The length of time needed for healing depends on the bone site and on treatment; some bones, such as the navicular or the fifth metatarsal base, have a poor blood supply and require total immobilization to heal completely.

Sometimes nature can use a little help. One Italian study showed that an electrical bone stimulator helped athletes heal slightly quicker from their injuries. This small device is worn for several hours a day, typically at night while sleeping. It sends a painless electrical current around the site of the fracture, helping to stimulate healing. You can purchase a bone stimulator, but they cost more than $1,000 and may not be covered by insurance. Renting one isn’t an option, as they have a shelf life of only one year. Rich Kenah, the 1997 800-meter World Championship bronze medalist, used a bone stimulator religiously to help heal his navicular stress fracture in 1998 and is now aiming for the 2000 U.S. Olympic team. [Note: Kenah made the 2000 U.S. Olympic Team in the 800m, finishing 2nd at the U.S. Trials with a 1:46.05]

Stress fracture is one of the only injuries for which I tell runners not to run. You must lay off until there is absolutely no pain when you press on the area. Attempting to rush things can cause re-injury. The good news is that usually you can crosstrain through a stress fracture with any activity that doesn’t cause pain during or after. Swimming, deep-water running, biking and using an elliptical machine are all excellent alternatives for most people. In some cases, however, such as fractures of the navicular bone, the front of the tibia or the hip, you may need to keep all exercise to a minimum. For the navicular, a short leg cast and six weeks on crutches is the best treatment.

Most important is to work with a sports medicine specialist to determine the cause of the fracture, and follow the proper course to prevent it from recurring. Use the down time to get refreshed mentally, strengthen all your major muscle groups and come back stronger than before the injury.

Dr. Brian Fullem (brian@docfullem.com) is a sports podiatrist in Clearwater, Florida. He has captained the Bucknell Alumni team that won the last two Reach the Beach relays.